What an unbelievable, surreal, momentous, and historic week it has been with Herman’s amazing release after 42 years, the State’s vindictive last ditch attempt of a reindictment, and his passing. This, all in a period of days. His family and friends are still in a whirlwind.

Always larger than life, Herman leaves a huge hole in so many of our lives. Below is information about Herman’s funeral service on Saturday and a benefit tomorrow to help the family pay for the service.

Message from Robert King About Oct. 8 Benefit for Herman’s Family 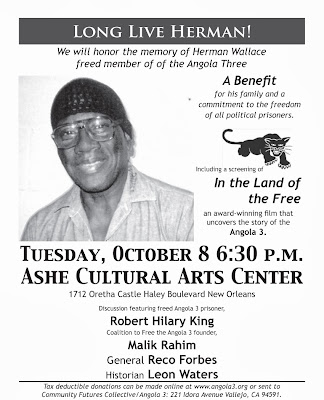 Dear friends/supporters/comrades, et al,
We’re sending this flyer out to all A3 supporters (especially those in New Orleans and Louisiana area) to come out in support of a benefit to raise funds to help cover the costs of Herman’s burial.  For those far-away supporters who cannot attend and would like to help, donations can be made here.
The event will take place at Ashe Cultural Center, 1712 Oretha Castle Haley Boulevard in New Orleans at 6:30 pm, on Tuesday, October 8.
Please share and disseminate the attached flyer widely.

Thanking all supporters in advance, hope to see you there on Tuesday.
As ever,
King