RELATED:  Albert Woodfox and Robert King’s European Tour in November  II  View photos and updates from the Euro Tour at our Facebook page 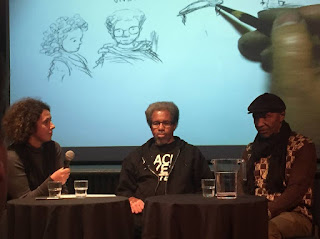 (PHOTO:  Albert and Robert in conversation with Samantha Roddick at the Amnesty UK event on November 1) 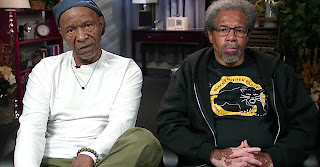 A new UK Guardian article written by Rowan Moore features an interview with Albert Woodfox, where he reflects upon life after release, among other things. An excerpt is featured below, but you can read the full article here.

It was, he says, “so disappointing when I got out to find that conditions when I left 45 years ago are still here. With the first black president, everyone thought we had reached a milestone, but it just looked different.” If, he continues “America has nothing else to thank Donald Trump for, it is to show that racism is very much alive. He didn’t come out of nowhere. I thought the battle would be economic, not sick-assed philosophy about racism 45 years later.”

And so he is travelling and speaking, jetting from one American city to another to speak of his experiences and to fight, along with Robert King, for “the abolishment of solitary confinement and freedom for political prisoners” – and political prisoners is what he believes many of those incarcerated in America to be – “who remain victims of the criminal injustice system in the USA.” Apart from his fugitive trip to New York, he had never been out of Louisiana until this year, but now he travels from coast to coast and north to south, and is coming to Britain next month for a multi-city tour. All this from a man who came out of jail with hepatitis C, diabetes, renal failure and hypertension. His health has improved dramatically in the months of his freedom, partly due to receiving treatments denied him inside.

“We’re trying to get some kind of civil oversight,” he says, “to hold the administration accountable. When society looks the other way then the judicial system, from police to the courts to the prisons, becomes judge, jury and executioner.” The treatment of people like himself “is more than a legal issue, it’s a moral issue. It’s no different to what they do in other countries that we call dictatorships. We just have a more sophisticated way of doing it.”

He gets support from the people who campaigned for his release, from fellow activists, and especially from his brother – “my rock” – who is all that is left of the family he grew up with. But in general he likes to downplay the drama of his transition and to stress that, through continuing the activism that he started inside prison, his move to life outside was made easier. “There’s some residue, but it doesn’t dominate my life. I was not connected to the prison system. I did not have to break a lot of ties to the prison culture. I was already free in my mind. There was more like a physical adjustment. I had to learn to live beyond a 9ft cell.” Has he even had a holiday since his release in February? “I went to Yosemite. I read a lot of National Geographic in prison and I had a lifetime desire to go there. It was overwhelming.” 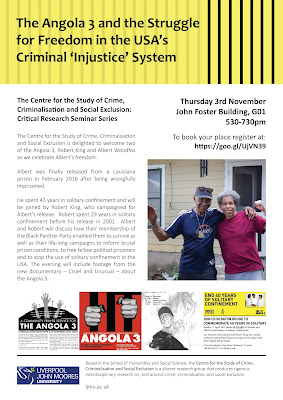 The International Angola 3 Coalition is delighted to announce the first European visit from Albert Woodfox in November 2016.  Albert Woodfox (the last remaining member of the Angola 3 to be freed from prison in Louisiana, USA in February this year after 43 years in solitary confinement) and Robert King (released 15 years ago after 29 years in solitary falsely accused of the same crime) will visit the UK and France to meet supporters and to continue their campaign to call for the abolition of solitary confinement and freedom for political prisoners who remain victims of the criminal (in)justice system in the USA.

The visit will take place during the USA presidential election and comes at a time when questions of race and injustice in the USA are as relevant today as they were in the 1970’s when Woodfox and King were members of the Black Panther Party whilst in prison campaigning for human and civil rights.

The visit will start in London with Albert and Robert launching Amnesty UK’s Write for Rights Campaign on Tuesday 1 November followed by the below UK public events:

The Angola 3 and the Struggle for Freedom in the USA’s Criminal ‘Injustice’ System. Prof. Joe Sim in conversation with Albert Woodfox and Robert King.

Black Power and the Struggle for Freedom in the USA’s Criminal “Injustice” System – The Story of the Angola 3.  Conversation with Woodfox and King.

Life in solitary confinement in the USA: the story of the Angola 3. The Guardian’s Simon Hattenstone talks to Albert Wodfox and Robert King on the eve of the US election about their experiences and the struggle for civil rights in the US from the 60s to the present day.

To attend, book your ticket here.

Black Panthers to Obama’s America: Black Power and the struggle for freedom in the criminal (in)justice system – personal accounts of the Angola 3. In conversation with Albert Woodfox and Robert King. 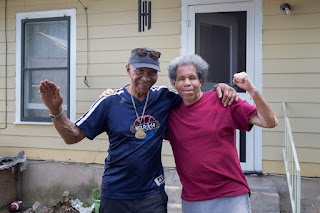 Albert and Robert look forward to meeting friends and supporters. Please spread the word of these events to friends and networks!