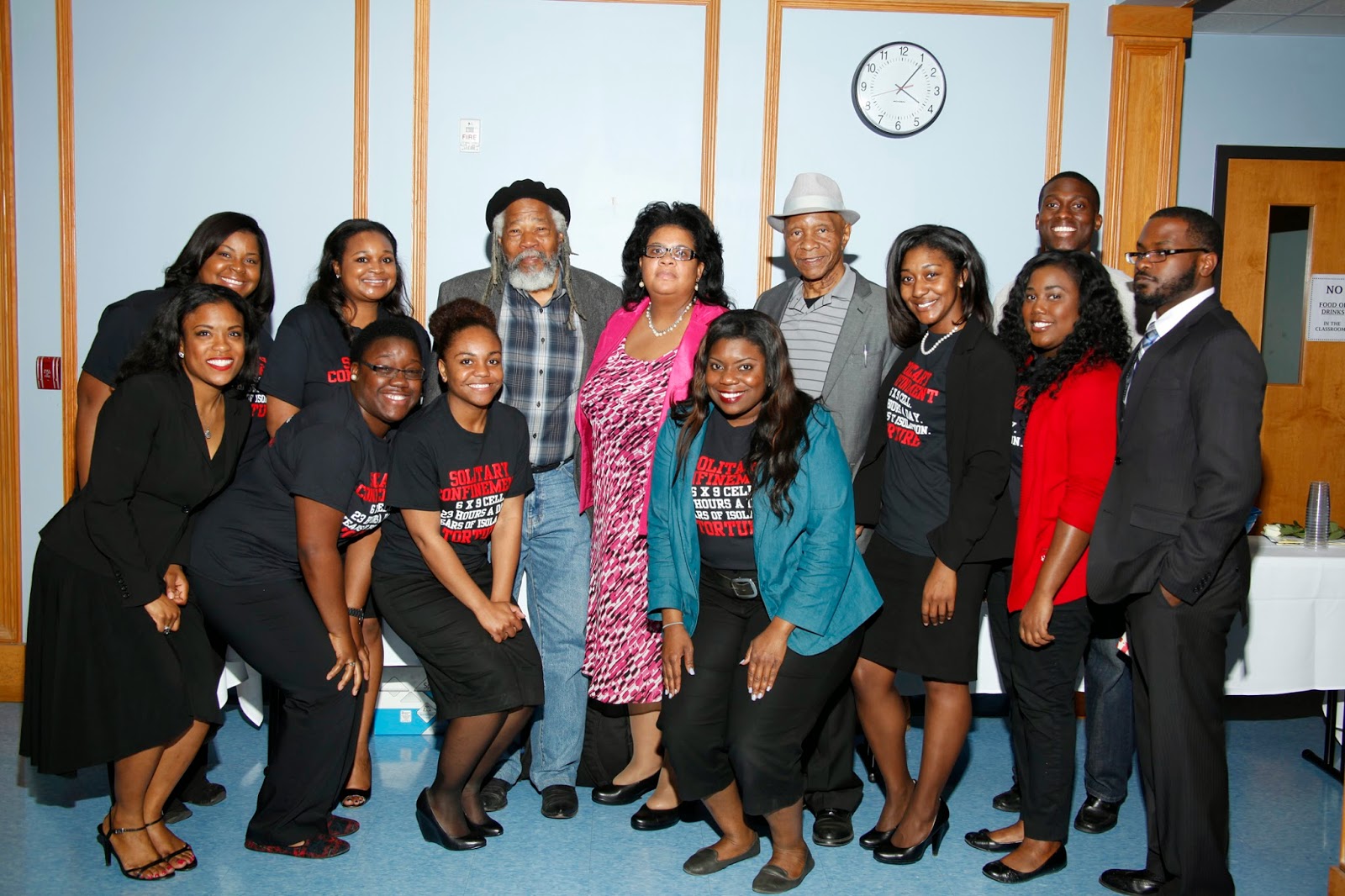 Written for Angola 3 News by Arisa A. Banks

The seed for advocacy was planted among the student body stirred by the Solitary Confinement Exhibition, during 2014 Law Week activities at the Southern University Law Center in Baton Rouge, Louisiana.

The story of the Angola 3 has exposed the use of long term solitary in the Louisiana State Penitentiary system and has brought attention to this issue nationwide and internationally. From the compelling stories of the injustice experienced by these three inmates, this exhibit was given life.

Professor Angela Allen-Bell has been a prominent advocate of the Angola 3 here on Southern University Law Center’s campus. She has done extensive research about long-term solitary confinement practices, particularly at Angola State Penitentiary. She has written numerous articles on the Angola 3, and has become heavily involved in the grass-root movement for their freedom. Her passion and commitment to this movement has been one that she has successfully passed on to her students. It is her vision, passion, and tenacity in continuing the fight for justice that planted the seed for the solitary confinement exhibit at the 2014 Law Week.

This week-long public display included documentaries on the Angola 3 and a two dimensional cell that displayed the actual dimensions of a 6X9 solitary confinement cell. The recreated cell included a depiction of a bed, desk, and toilet to illustrate how such a cell may look. The featured documentaries included In the Land of the Free, Hard Time and The Angola 3: Black Panthers and the Last Slave Plantation. The exhibition also featured keynote speakers Checo Yancy, the state president of Louisiana Citizens United for the Rehabilitation of Errants (CURE,  a national organization whose mission is to help reduce crime through criminal justice reform), prison advocate and longtime Angola 3 supporter Malik Rahim, a prison advocate and Robert King, the first freed member of the Angola 3.

King and Rahim honored the campus with their presence during the Herman Wallace Memorial Program. The Herman Wallace Memorial Program occurred on March 20, 2014. It was a program that was part of the speaker series event for the exhibit to commemorate the efforts of Mr. Wallace in his fight for justice and to honor his legacy. King spoke to the student body about his experience while in solitary confinement for 29 years at Angola State Prison. While addressing the conditions of living in solitary confinement, King challenged the student body to advocate for justice and human rights. He ended his speech by arguing that Wallace’s legacy must not end because of his death, but that the fight continues.

The audience was so engaged by King’s presentation that the silence was deafening and students were still talking about its impact for weeks following the event. Carlton Miller, a graduating senior and participant in the program, stated how he was impacted and moved from the event. In reflection, Miller said: “Learning of the significant impact solitary confinement has on human beings’ mind, body, and spirit has truly inspired me to seek justice for those forgotten in the deep pits of prisons across this country. This isn’t an isolated issue affecting only those who are imprisoned, but rather is an issue that plagues our whole country. It is a stain on our reputation and a testament of our character if we continue to let this issue go unresolved. Hearing the vivid descriptions some inmates are facing in solitary confinement is unsettling. We can and must seek to use and influence the legal and political system to be sensitive to this issue.”

Felicia Hamilton, a graduating senior, felt that this program and exhibit was among one of the best events of Law Week, and said further that “the exhibit was both chilling & thought-provoking! Hosting the exhibit in the Civil Rights Room was an appropriate backdrop to learn more about the injustice experienced by the Angola 3.”

Below are photos from the Civil Rights Room exhibit and the event with Robert King: 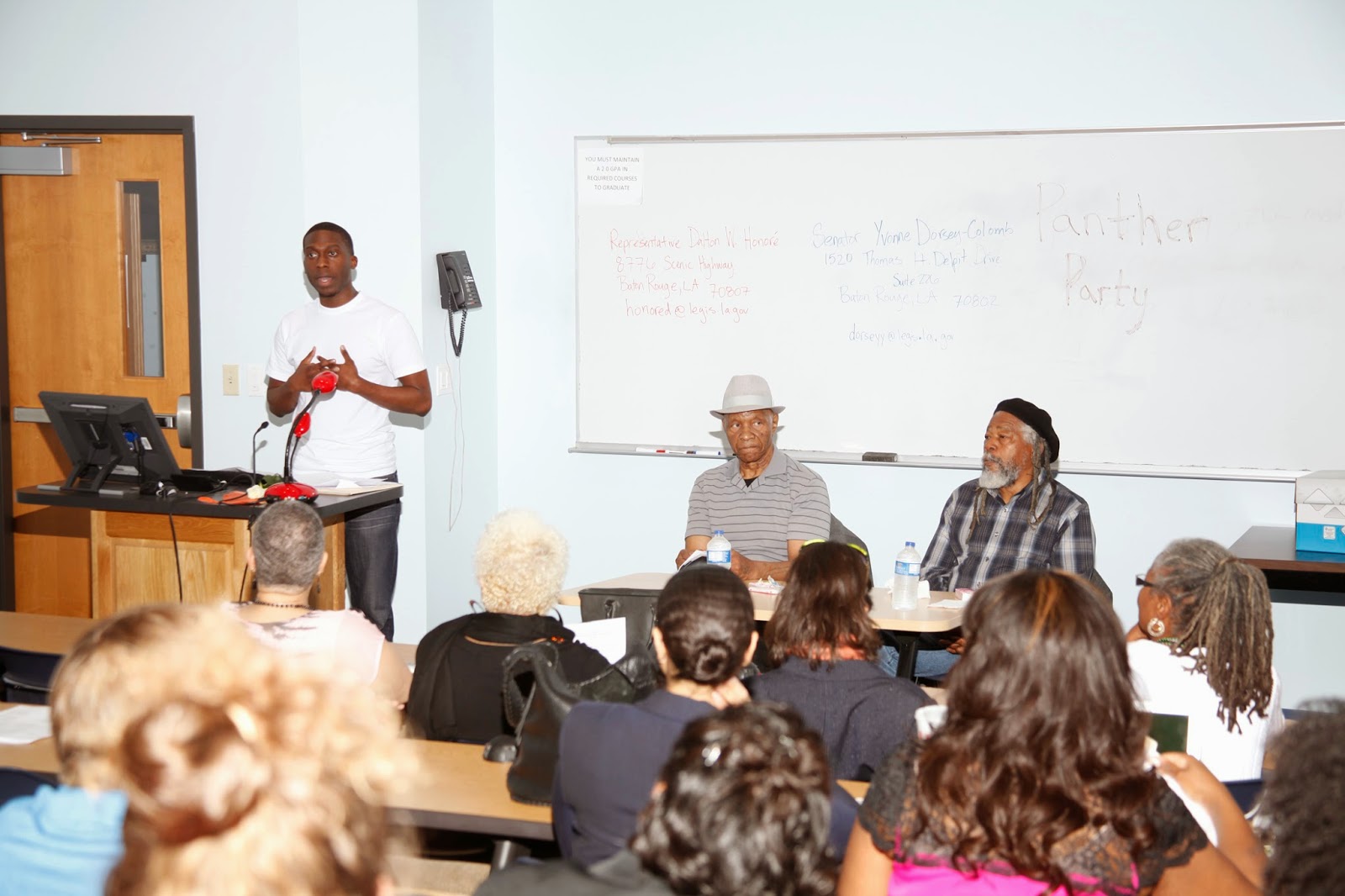 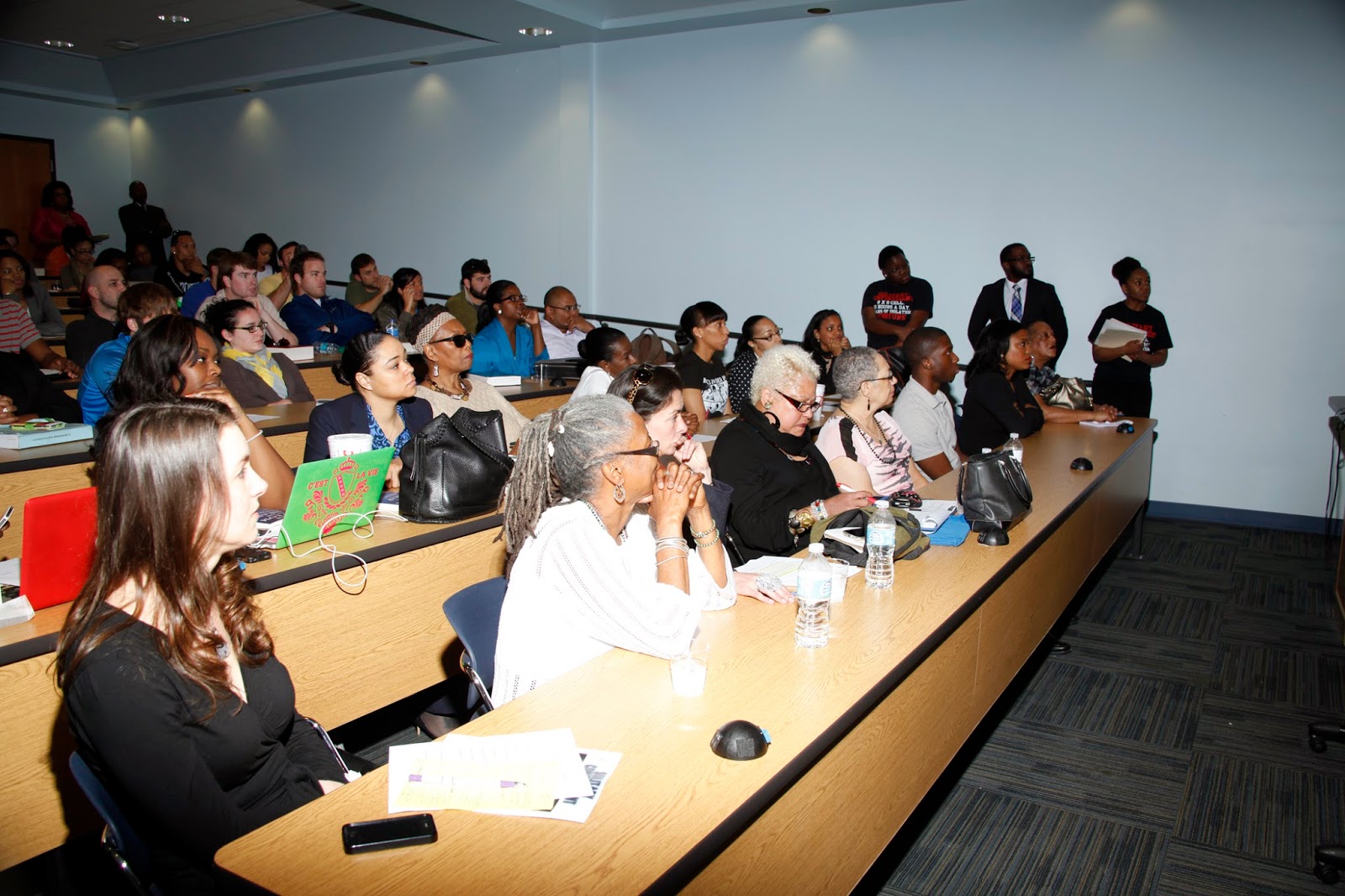 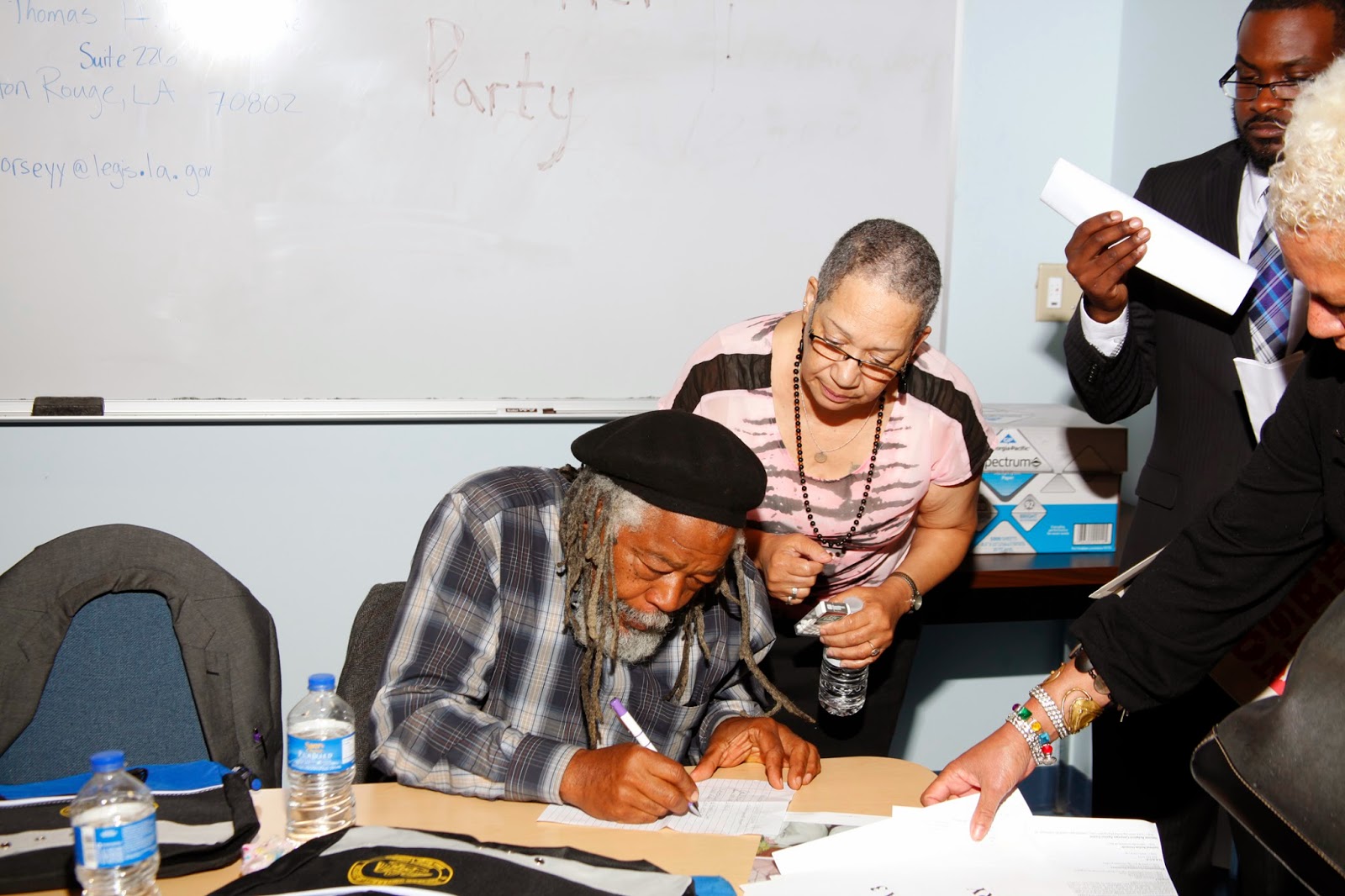 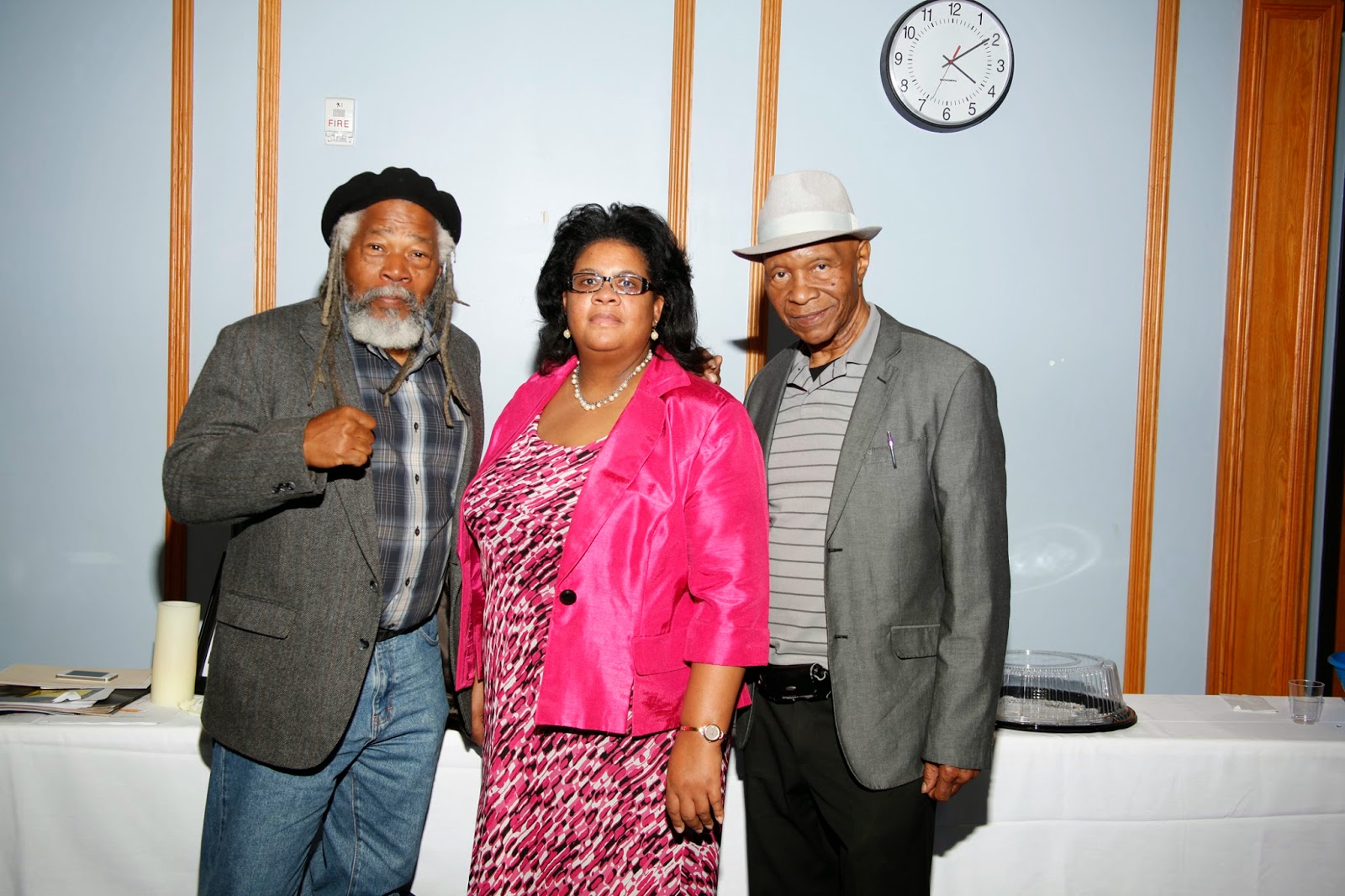 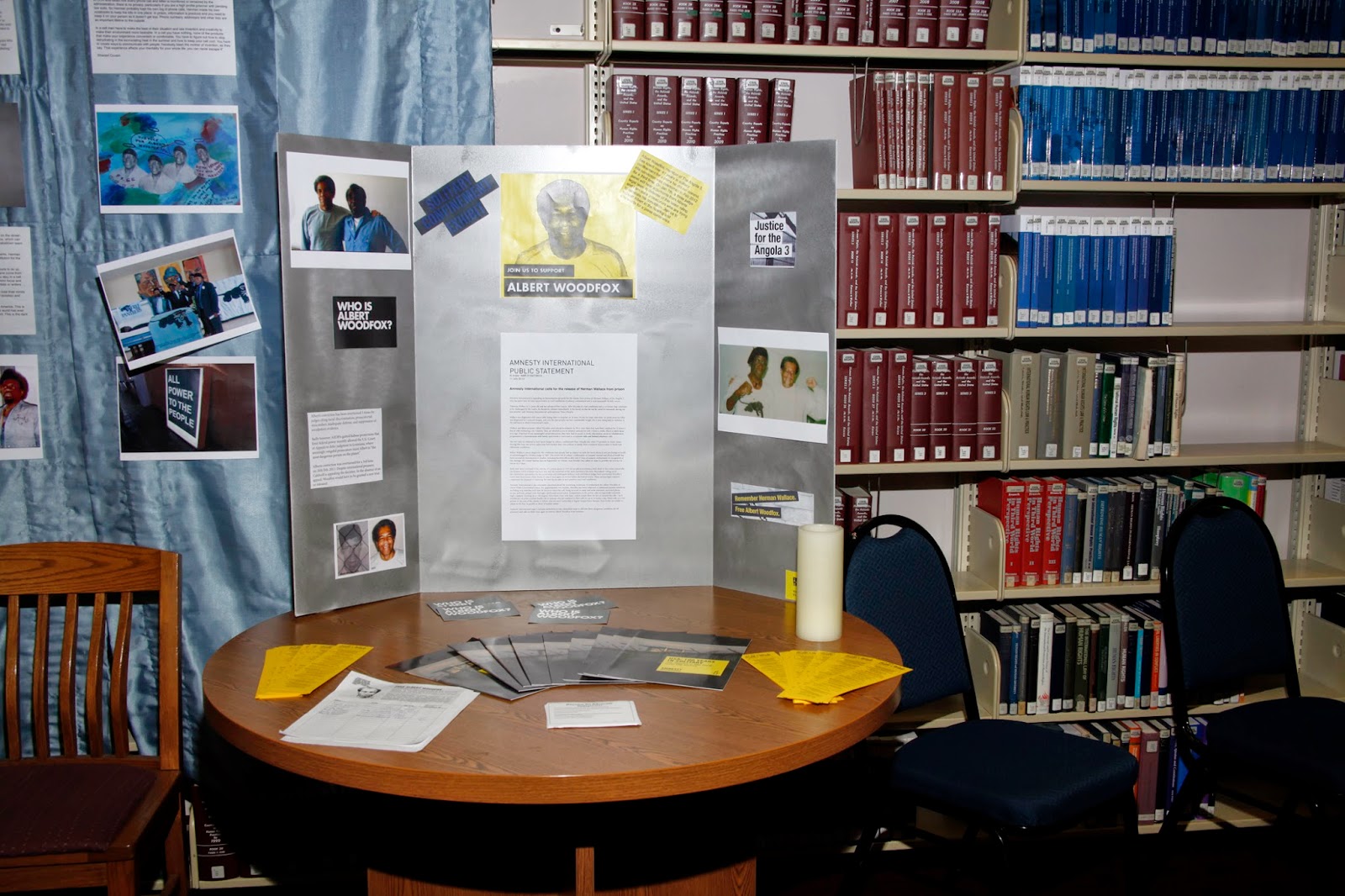 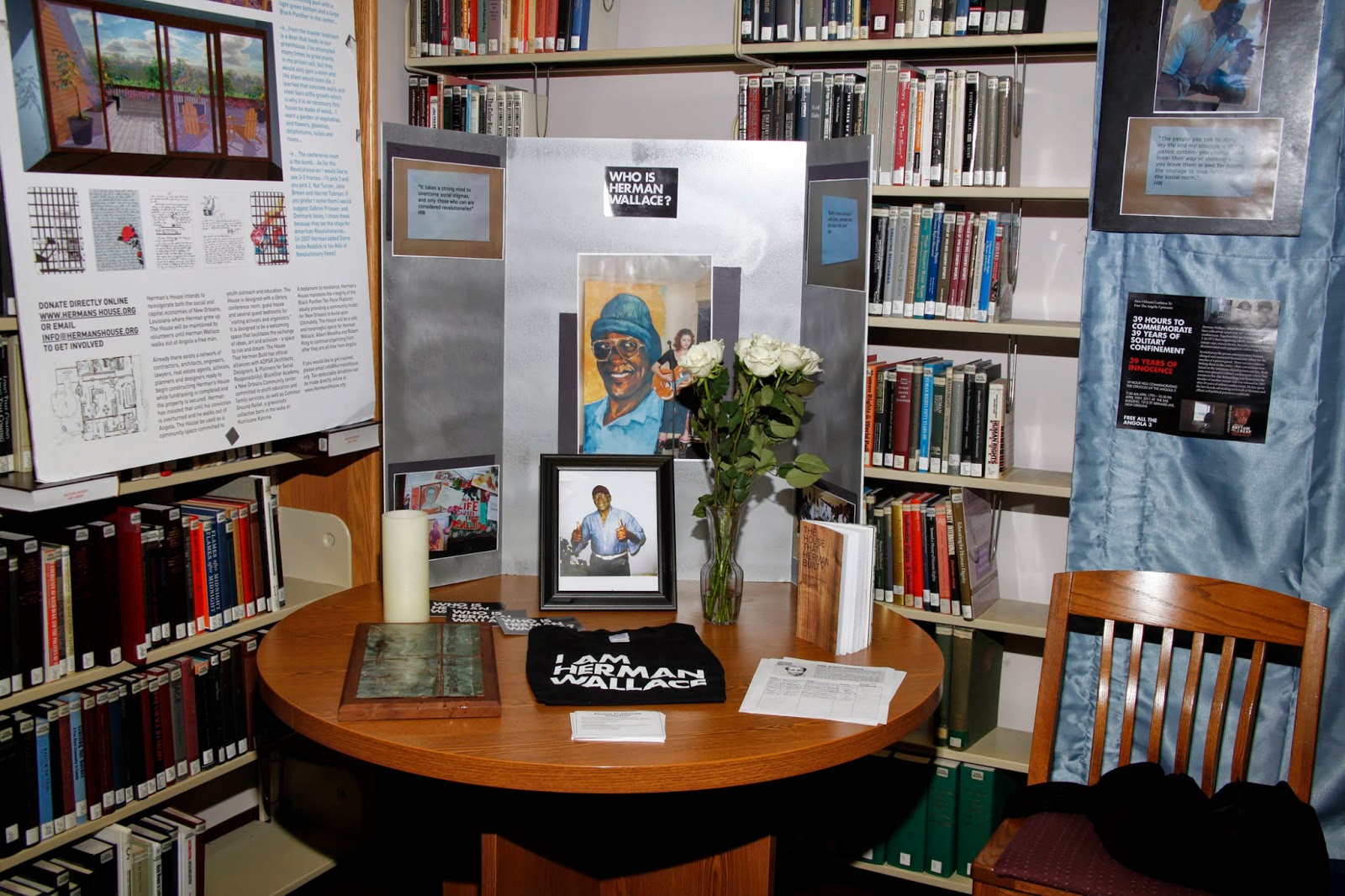 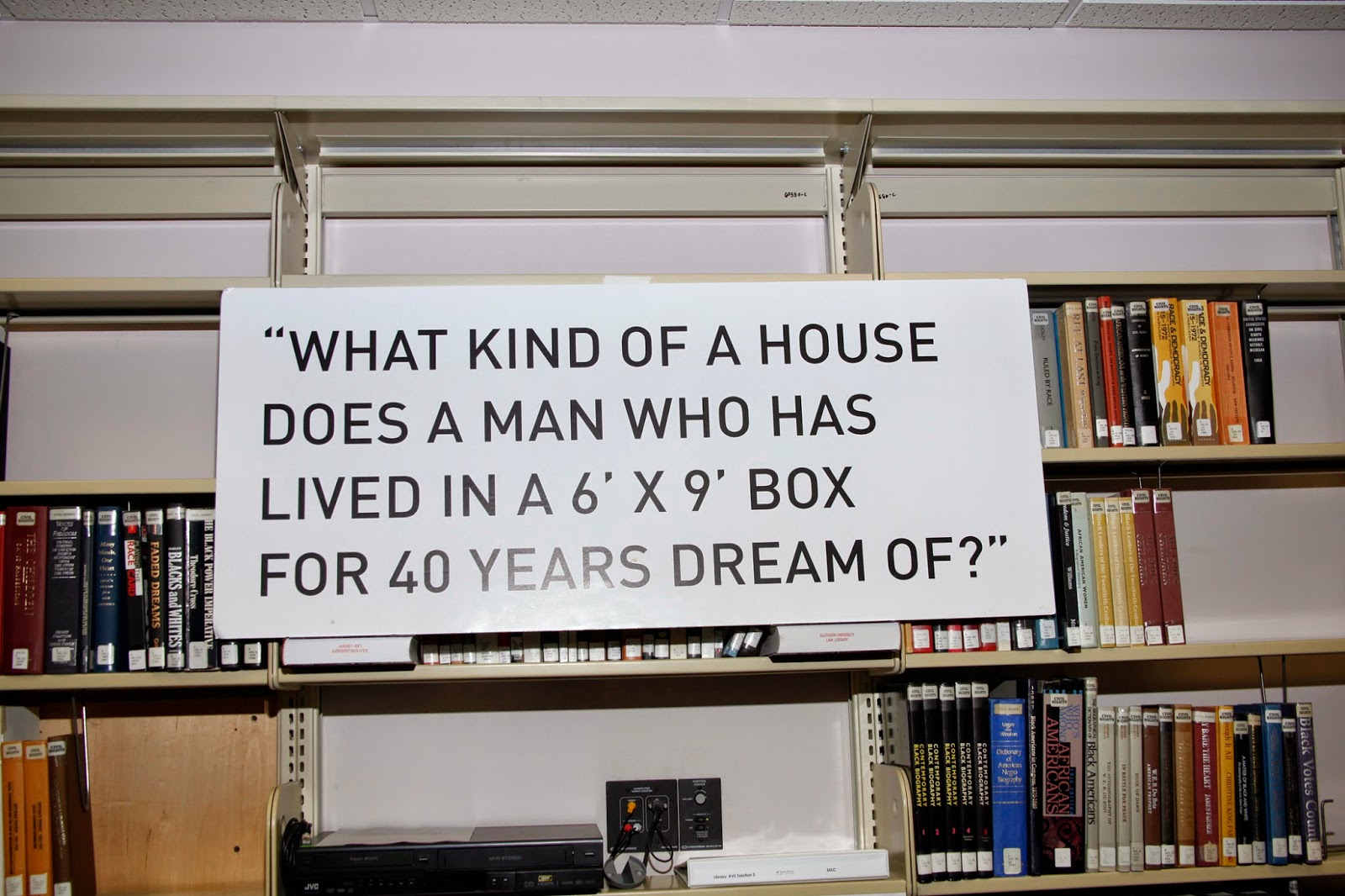 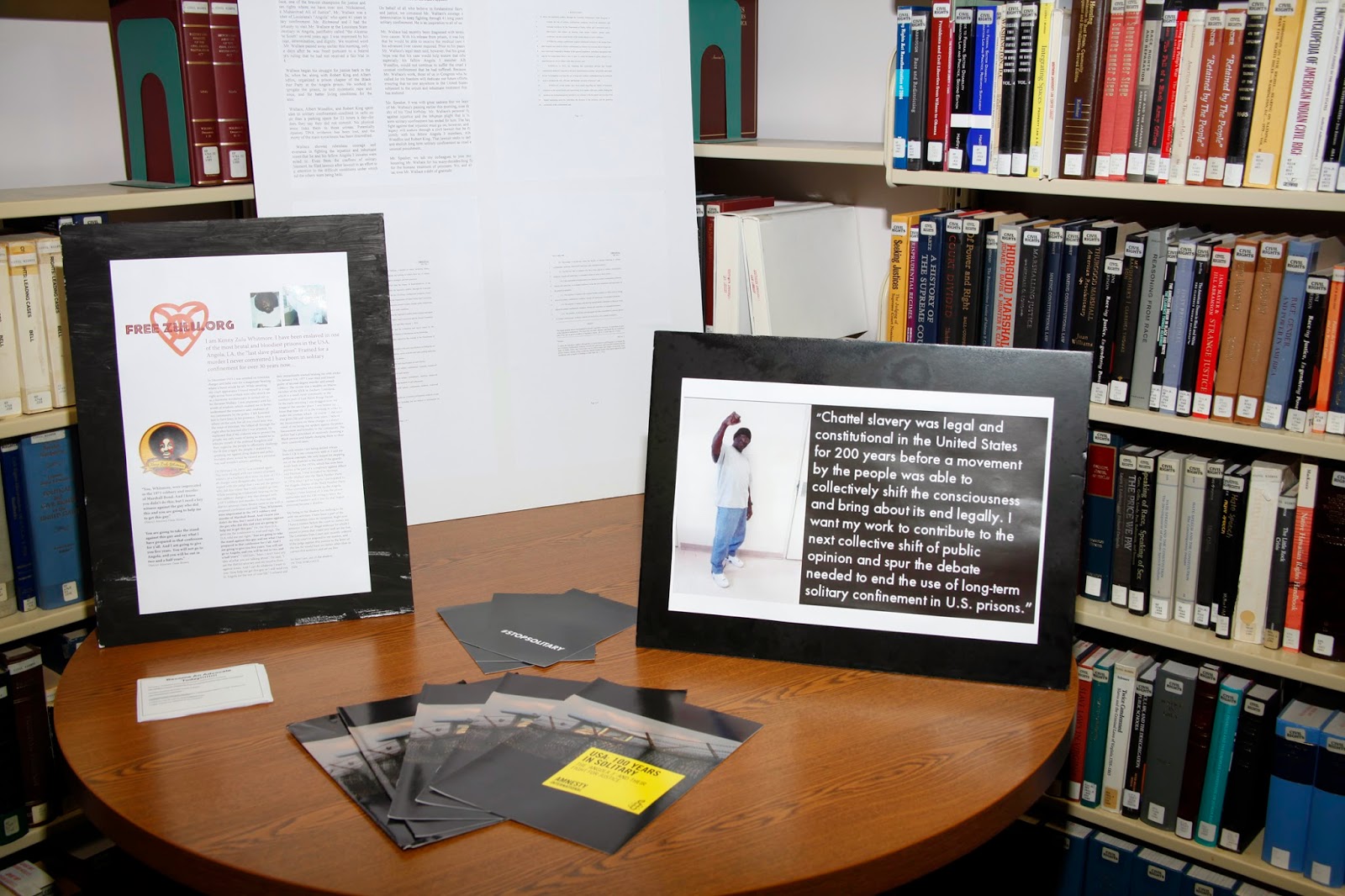 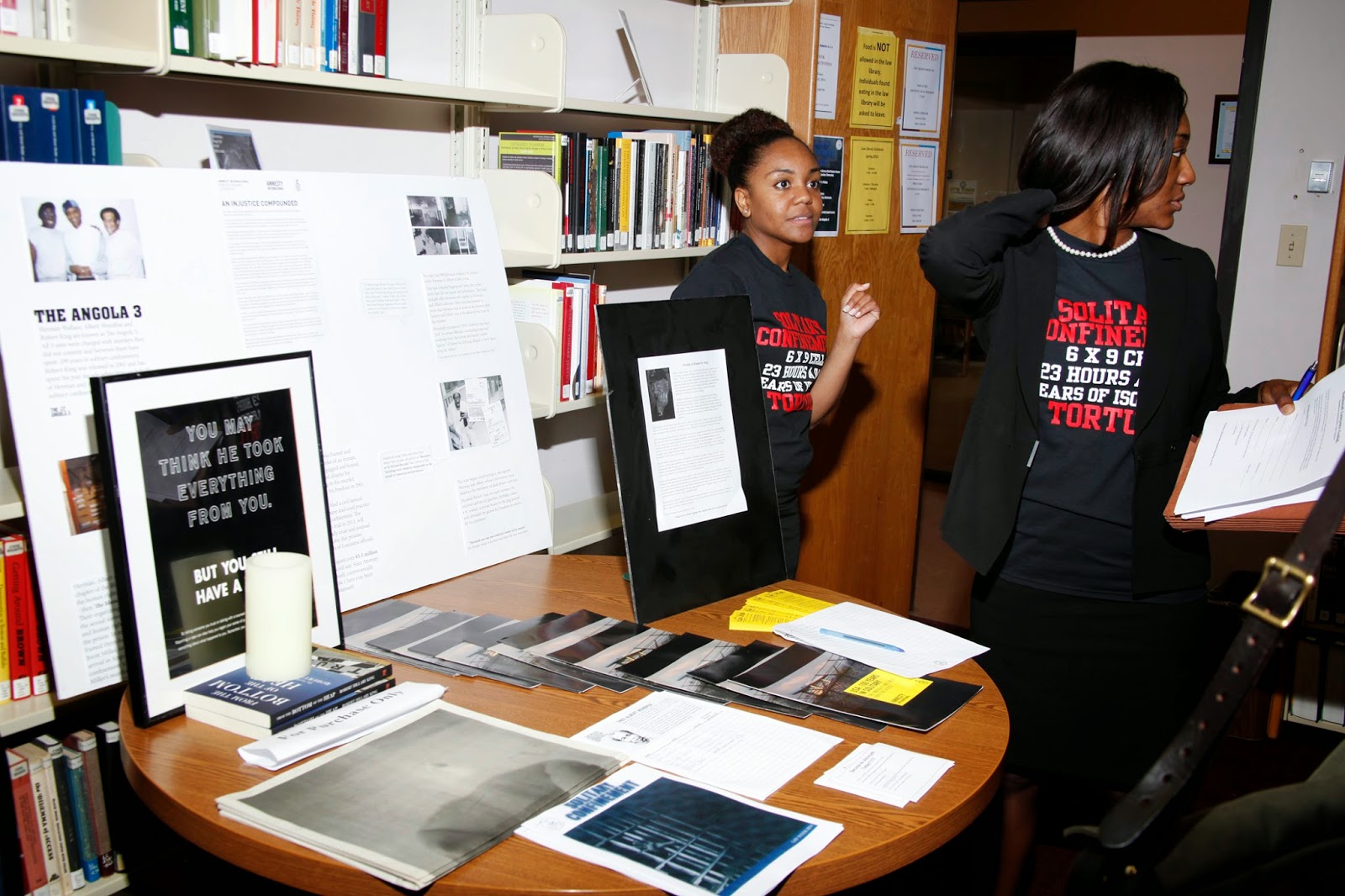 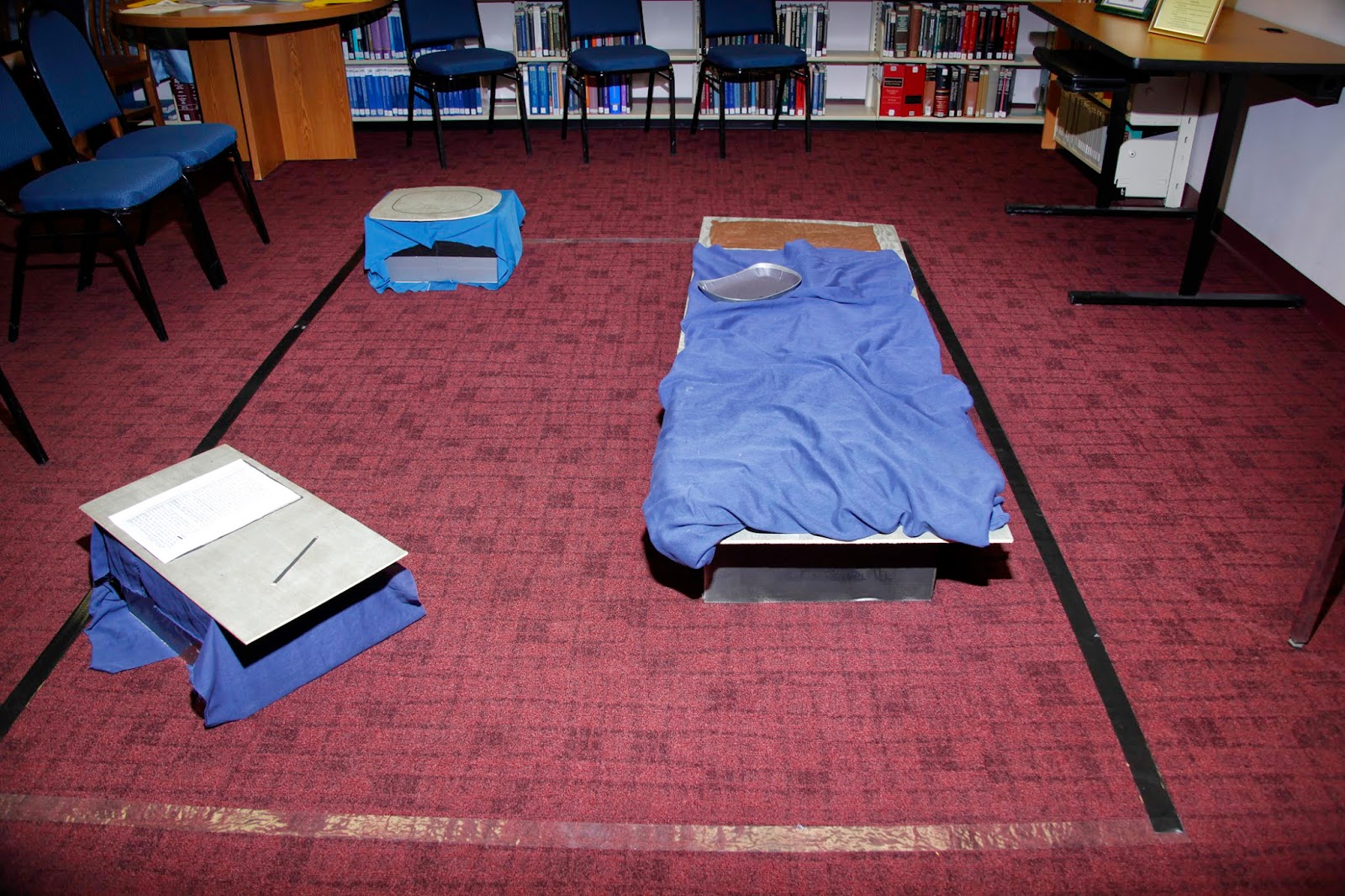