public safety News from the Angola 3

RELATED:  Solidarity from Chiapas, Mexico and in Berlin, Germany (read writeup and watch video)
At lunchtime on Wednesday July 31, Frank Ogawa/Oscar Grant Plaza in downtown Oakland hosted a protest rally in support of the CA prisoner hunger strike that began on July 8. The rally was followed by a spirited march through downtown Oakland (view event photos here). This event was held in conjunction with other solidarity events around the world.
The rally’s MC, Jerry Elster from All of Us or None, announced the upcoming protest outside the west gate of San Quentin Prison at 2pm on August 3, and introduced a wide range of anti-prison activists who spoke in support of the current hunger strike in California prisons. Featured here are video clips from three of the rally’s speakers.
–Danny Murillo survived 14 years of solitary confinement in California prisons and is currently a student at the University of California at Berkeley.
–Janetta Louise Johnson from Transgender Intersex Gender Variant Justice, where she works as Program Coordinator for Member Leadership Development and the Formerly Incarcerated and Convicted People’s Movement. TGI Justice, who recently made a statement of support for the hunger strike, describes itself as “a group of transgender people—inside and outside of prison—creating a united family in the struggle for survival and freedom,” whose membership includes “low income transgender women of color and our families who are in prison, formerly incarcerated, or targeted by the police.”
–Paige Kumm from Causa Justa – Just Cause, where she works as a San Francisco Housing Rights Counselor/Organizer. The group’s mission statement is to build “grassroots power and leadership to create strong, equitable communities. Born from a visionary merger between a Black organization and a Latino immigrant organization, we build bridges of solidarity between working class communities of color.”

–Angola 3 News is a project of the International Coalition to Free the Angola 3. Our website is www.angola3news.com where we provide the latest news about the Angola 3. We are also creating our own media projects, which spotlight the issues central to the story of the Angola 3, like racism, repression, prisons, human rights, solitary confinement as torture, and more. 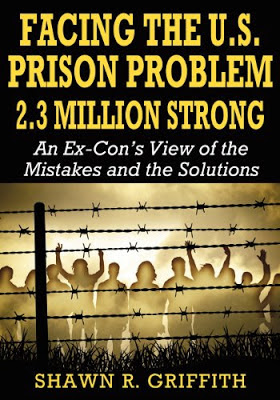 –An interview with educator, author and former prisoner Shawn Griffith
By Angola 3 News
If given the attention it deserves, an important new book is certain to make significant contributions to the public discussions of US prison policy. The author, Shawn Griffith, was released last year from Florida’s prison system at the age of 41, after spending most of his life, almost 24 years, behind bars, including seven in solitary confinement. Facing the US Prison Problem 2.3 Million Strong: An Ex-Con’s View of the Mistakes and the Solutionwas self-published just months after Griffith was released from what is the third largest state prison system in the US, after California and Texas.
This new book’s thoughtful analysis and chilling reflections on what author Shawn Griffith experienced while incarcerated is a remarkable illustration of why the US public must listen to the voices of current and former prisoners who have stories that only they can tell. Griffith writes that “by integrating my own personal experiences with statistics and examples from different corrections systems around the nation, I am attempting to discredit the general perception that the system is designed to enforce and protect justice for everyone. The U.S. criminal justice system is an economically and politically profitable enterprise for special interest groups in this country. The general taxpayer needs to understand how the abusive policies fostered by these groups worsen the U.S. prison problem and the debt crisis through wasted corrections expenditures.”