–Special thanks to PBS, who is currently honoring Herman by streaming the film Herman’s House. Watch the full movie here. buy Aciclovir 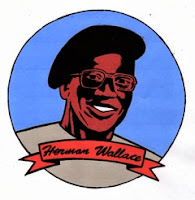 This morning we lost without a doubt the biggest, bravest, and brashest personality in the political prisoner world.  It is with great sadness that we write with the news of Herman Wallace’s passing.

Herman never did anything half way.  He embraced his many quests and adventures in life with a tenacious gusto and fearless determination that will absolutely never be rivaled.  He was exceptionally loyal and loving to those he considered friends, and always went out of his way to stand up for those causes and individuals in need of a strong voice or fierce advocate, no matter the consequences.

Anyone lucky enough to have spent any time with Herman knows that his indomitable spirit will live on through his work and the example he left behind.  May each of us aspire to be as dedicated to something as Herman was to life, and to justice.

Below is a short obituary/press statement for those who didn’t know him well in case you wish to circulate something.  Tributes from those who were closest to Herman and more information on how to help preserve his legacy by keeping his struggle alive will soon follow.
——————
On October 4th, 2013, Herman Wallace, an icon of the modern prison reform movement and an innocent man, died a free man after spending an unimaginable 41 years in solitary confinement.

Herman spent the last four decades of his life fighting against all that is unjust in the criminal justice system, making international the inhuman plight that is long term solitary confinement, and struggling to prove that he was an innocent man.  Just 3 days before his passing, he succeeded, his conviction was overturned, and he was released to spend his final hours surrounded by loved ones.  Despite his brief moments of freedom, his case will now forever serve as a tragic example that justice delayed is justice denied.

Herman Wallace’s early life in New Orleans during the heyday of an unforgiving and unjust Jim Crow south often found him on the wrong side of the law and eventually he was sent to the Louisiana State Penitentiary at Angola for armed robbery.  While there, he was introduced to the Black Panther’s powerful message of self determination and collective community action and quickly became one of its most persuasive and ardent practitioners.

Not long after he began to organize hunger and work strikes to protest the continued segregation, endemic corruption, and horrific abuse rampant at the prison, he and his fellow panther comrades Albert Woodfox and Robert King were charged with murders they did not commit and thrown in solitary.  Robert was released in 2001 after 29 years in solitary but Herman remained there for an unprecedented 41 years, and Albert is still in a 6×9 solitary cell.

Herman’s criminal case ended with his passing, but his legacy will live on through a civil lawsuit he filed jointly with Robert and Albert that seeks to define and abolish long term solitary confinement as cruel and unusual punishment, and through his comrade Albert Woodfox’s still active and promising bid for freedom from the wrongful conviction they both shared.

Services will be held in New Orleans. The date and location will be forthcoming.