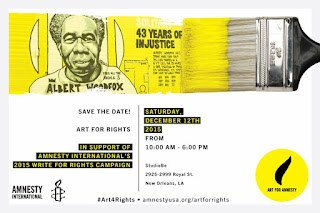 Join Amnesty International USA in New Orleans on December 12, from 10am to 6pm, to celebrate art, human rights and international solidarity. As part of the organization’s annual “Write for Rights” campaign, Amnesty International USA is partnering with New Orleans native, Brandan “BMike” Odums to host an “Art for Rights” pop-up exhibition at Studio Be, 2925-2999 Royal Street in New Orleans. Attendees will not only have the opportunity to write letters on behalf of prisoners and human rights defenders from around the world, they will witness the creation of 12 different murals honoring the struggles and activism of individuals on whose behalf Amnesty works.

Art can be a cultural tool during times of unrest to expose truths, helping to humanize social struggle and actualize grievances and fears. Often, it is what inspires us to action.

Amnesty has chosen to hold the inaugural event in New Orleans where Albert Woodfox, one of the 12 cases featured in this year’s Write for Rights campaign, has been held in solitary confinement for over 40 years.

Robert King, the first freed member of the Angola 3, will be joining BMike as the keynote speaker.

Through the Write for Rights campaign, every year in acknowledgement of Human Rights Day on December 10, hundreds of thousands of people around the world send a message to someone they’ve never met. Letter writing has always been at the heart of Amnesty International’s human rights campaigning and 54 years of human rights activism shows us that the collective action of our members really does have the power to change lives.

This year, Art For Amnesty is doing something different, we are amplifying Write for Rights with art. On December 12th, a historic event will take place: ART FOR RIGHTS. Through a partnership with New Orleans native, Brandan “BMike” Odums, we are collaborating with 12 artists to highlight the stories of 12 international cases through art and creative installations. In addition to an experience aimed to bring attention to Louisiana as the “Prison Capital of The World”, murals will call attention to cases of solitary confinement, torture, forced marriage, forced eviction, imprisonment for a miscarriage, LGBTQI rights, death penalty, enforced disappearance and prisoners of conscience.

The end goal remains the same: to inspire participants to write letters and take action.
buy Dapoxetine
Art can be a cultural tool during times of unrest to expose truths, helping to humanize social struggle and actualize grievances and fears. Often times, it is what inspires us to action. We’ve chosen to hold the inaugural event in New Orleans where Albert Woodfox, one of the 12 cases, has been held in solitary confinement for over 40 years. Art for Rights will be located in a 30,000 square foot warehouse, where over 5,000 people will join Art For Amnesty for a one-day, free, pop-up art event, with the unveiling of the work by these amazing artists.

–    10,000 letters for the Write for Rights Campaign (5,000 participants x 2 letters per person for entry)  fluconazole without prescription
–    2,500 Letters Submitted Online
–    Draw attention and call for the release of Albert Woodfox from solitary confinement.
–    Engage with stakeholders from the criminal justice, human rights, arts, and activist communities to lay the groundwork for further action on mass incarceration in Louisiana.

HOW TO GET INVOLVED:

–    Come Out and Bring Friends – Please help us make sure as many people as possible attend the inaugural Art For Rights pop-up exhibit by attending and/or organizing a group trip. Admission is simply two letters for the Write For Rights campaign.