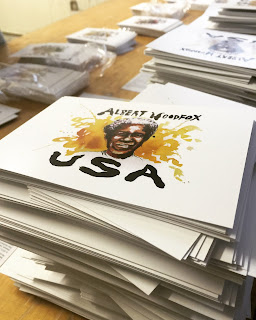 (PHOTO: Tabling at the Amnesty Art for Rights event in New Orleans, December 2015)

We want to send thanks from Albert and Robert to Amnesty activists for December’s Write for Rights campaign. Albert enjoyed receiving the thousands of letters and postcards which were delivered to him in sacks! We kept him up to date with photos of the country activities including his “cut out” in front of London’s landmarks, the first screening of the documentary Cruel and Unusual in the Louvre Paris and the art event in New Orleans.

On the legal front, Albert’s legal teams have filed their appeal of the overturning of Judge Brady’s unconditional Writ with the U.S. Supreme Court. They continue to prepare for Albert’s retrial, though no date has been set. The civil trial is still scheduled to begin June 27th of this year.

In St. Francisville, still behind solitary walls, Albert awaits the status of a slate of appeals of rulings pending in Louisiana’s 1st Circuit Court of Appeal from September that began to set up the legal and procedural landscape for the retrial.

Unfortunately, the first of these decisions came a few days ago and served to overturn Judge Carmichael’s decision requiring Albert’s retrial jury to be unanimous. Despite the fact that he was afforded a unanimous jury in both of his first two trials, only 10 of 12 jurors will be required to convict or acquit him in the third. Louisiana is one of only two states that allow non-unanimous juries to hand down life sentences. Many think eventually the law will be declared unconstitutional, but not in time for Albert. His legal team is appealing this decision to the Louisiana Supreme Court. 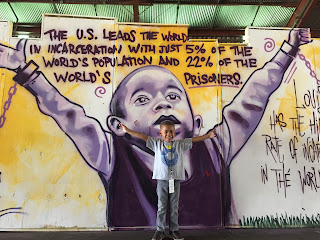 Albert’s 69th birthday is on February 19. If you would like to send him a birthday card, his address is:

**We want to remind supporters that Albert is not allowed to receive stamps or CDs though he can receive books if they come directly from Amazon. Cards and messages are always the best gift, but if you want to send more, the jail allows Commissary deposits to be sent in the form of postal money orders made out to Albert and mailed to his regular mailing address above.

Message from Albert about Eric Brown

Albert has been asking us to bring some attention to another case of dreadful injustice, the case of Eric Brown.  This is an unusual request for Albert, as he knows how hard everyone is working on his case and rarely bothers supporters for any special requests.

In August of 1994, when Eric was 16 years old, he was wrongfully convicted and sentenced to life without parole plus 30 years for the murder of a known adult white drug dealer although there was no murder weapon, no witnesses and nothing tying Eric to the crime.  The District Attorney told the all white jury that he thought that Eric knew who killed the drug dealer but refused to say. order Professional Viagra

In spite of a Supreme Court ruling that made it unconstitutional to sentence a juvenile to life in prison, Eric and too many others, sentenced to life as juveniles remain in prison.

Albert hopes that some of our supporters might write to Mr. Brown and see if they can help him bring his case to public attention.

Eric can be reached at:

Louisiana Must Give Children Sentenced to Die in Prison a Chance at Release, Rules SCOTUS 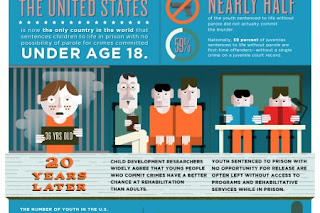 On Monday morning, ruling in Montgomery v. Louisiana, the United States Supreme Court granted a chance for review, release, and safe reentry to 301 men and women in Louisiana who were sentenced as children to die in prison.

“This is a hugely important decision recognizing the capacity of every child to grow and change,” said Louisiana Center for Children’s Rights (LCCR) Executive Director Joshua Perry.  “Now, the state of Louisiana must respond in way that is safe, smart, cost-effective, and fair.  All of the 301 men and women who are now serving juvenile life without parole sentences need a real opportunity to show that they’ve earned a chance at coming home safely.”

Recent articles by the UK Guardian and Upworthy examine Albert Woodfox’s continued incarceration and placement in solitary confinement in the context of recent developments in US prison policy by reporting. Upworthy reports:

In July, President Obama ordered the Department of Justice to review the use of solitary confinement in U.S. prisons. He showed skepticism for the practice, calling it “not smart.” The review has been completed, and the president is adopting its recommendations. In an editorial from The Washington Post on Jan. 25, the president outlined exactly what that means:

By the president and Department of Justice’s estimate, this will affect somewhere around 10,000 inmates…The president’s move doesn’t go so far as to eliminate the use of solitary confinement, but it does set the framework for future reviews of the system, which could in turn bring an end to the practice.

For now, though, Woodfox remains in solitary, awaiting yet another trial and, perhaps, freedom.

DJ Habi of WTUL News and Views recently interviewed artist and prison reform advocate Jackie Sumell about her in-progress exhibition called The Solitary Gardens. Sumell discusses Herman Wallace, who sparked her interest in the abolition of solitary confinement, and who was the focus of one of her previous projects titled Herman’s House. She explains the symbolism behind the project, as well as the medicinal and healing values it will have.

Listen to the full interview here. 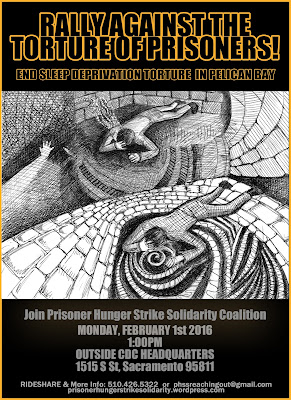 On Tuesday, Federal Judge Claudia Wilken approved the final agreement to end indefinite solitary confinement in California calling it humane, innovative and fair. Prisoners celebrated the settlement agreement, whose terms were agreed on last September, claiming it as a victory that bolstered their struggle for human rights.

Anne Weills, one of the attorneys representing the prisoners, pointed out that “what was missing from the courtroom were all the prisoners who risked their lives in the hunger strikes of 2011 and 2013.” She went on to say, “Yes, our litigation team did the best we could to bring our clients out of indefinite solitary confinement and into the light of day – but there is no doubt that we could not have gotten where we have with this settlement without the leadership of the brilliant, courageous, fearless and enlightened men in the Short Corridor at Pelican Bay who in 2011 set this all in motion.”

On the heels of the above mentioned settlement, a protest is being organized for February 1 outside CDCR HQ (see flyer above).

As of February 1st, it will be 181 days that the men in Pelican Bay SHU have been tortured by sleep deprivation. For six months the men have been awakened every 30 minutes, 48 times per day, due to so-called “security/welfare checks” by guards. California Department of Corrections and Rehabilitation (CDCR) claims these ‘checks’ will prevent suicide. Instead, these checks are causing serious psychological and physical harm. 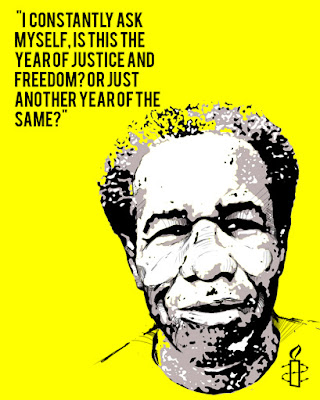