Below is the full text of the letter to the US Department of Justice and the accompanying press release issued today (view a PDF of the original letter get Valtrex ). 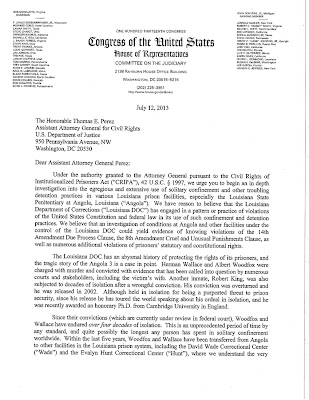 (WASHINGTON) – Today, Congressman John Conyers, Jr. (D-Mich.), Ranking Member of the full U.S. House Judiciary Committee, Congressman Jerrold Nadler (D-N.Y.), Ranking Member of the Subcommittee on the Constitution and Civil Justice, Congressman Robert C. “Bobby” Scott (D-Va.), Ranking Member of the Subcommittee on Crime, Terrorism, Homeland Security, and Investigations, and Congressman Cedric Richmond (D-La.) sent a letter to the Department of Justice’s Assistant Attorney General for Civil Rights Thomas Perez calling for investigations into the alarming conditions in several Louisiana state prison facilities. Specifically, the Members expressed deep concern that the Louisiana Department of Corrections has, “engaged in a pattern or practice of violations of the United States Constitution and federal law in its use of such confinement and detention practices.” In the letter the Representatives urge the Attorney General to begin an investigation into the use of solitary confinement, and other troubling detention practices, in numerous Louisiana prison facilities, especially in the Louisiana State Penitentiary at Angola, Louisiana.

The full version of the letter transmitted to the Department of Justice can be found below:

buy Promethasin Under the authority granted to the Attorney General pursuant to the Civil Rights of Institutionalized Prisoners Act (“CRIPA”), 42 U.S.C. § 1997, we urge you to begin an in depth investigation into the egregious and extensive use of solitary confinement and other troubling detention practices in various Louisiana prison facilities, especially the Louisiana State Penitentiary at Angola, Louisiana (“Angola”).  We have reason to believe that the Louisiana Department of Corrections (“Louisiana DOC”) has engaged in a pattern or practice of violations of the United States Constitution and federal law in its use of such confinement and detention practices. We believe that an investigation of conditions at Angola and other facilities under the control of the Louisiana DOC could yield evidence of knowing violations of the 14th Amendment Due Process Clause, the 8th Amendment Cruel and Unusual Punishments Clause, as well as numerous additional violations of prisoners’ statutory and constitutional rights.

The Louisiana DOC has an abysmal history of protecting the rights of its prisoners, and the tragic story of the Angola 3 is a case in point.  Herman Wallace and Albert Woodfox were charged with murder and convicted with evidence that has been called into question by numerous courts and stakeholders, including the victim’s wife. Another inmate, Robert King, was also subjected to decades of isolation after a wrongful conviction. His conviction was overturned and he was released in 2002.  Although held in isolation for being a purported threat to prison security, since his release he has toured the world speaking about his ordeal in isolation, and he was recently awarded an honorary Ph.D. from Cambridge University in England.

Since their convictions (which are currently under review in federal court), Woodfox and Wallace have endured over four decades of isolation.  This is an unprecedented period of time by any standard, and quite possibly the longest any person has spent in solitary confinement worldwide.  Within the last five years, Woodfox and Wallace have been transferred from Angola to other facilities in the Louisiana prison system, including the David Wade Correctional Center (“Wade”) and the Evalyn Hunt Correctional Center (“Hunt”), where we understand the very same complained-of constitutional and statutory violations have been perpetuated.  We understand that upon their transfers, brand new Closed Cell Restricted (“CCR”) tiers were created at these facilities, and additional inmates are now also confined on these tiers.  We have reason to believe that, as at Angola, many of the inmates housed in the CCR tiers of Hunt and Wade suffer from mental health and other serious illnesses.  Woodfox and Wallace continue to be held apart from the general prison population, to the detriment of their mental and physical health.

Indeed, after years of what we have been informed was sub-standard medical care, Herman Wallace was diagnosed just weeks ago with liver cancer.  We have heard that he lost over 50 pounds within 6 months.  Despite that dramatic weight loss, and at 72 years old, the prison did nothing to treat or diagnose him until he was sent to an emergency room on June 14.   Given the late stage of his diagnosis, his treatment options are now limited.  He is frail and ill, but is still being treated as if he is a threat to security, and we hear that he remains under lockdown conditions. This is unconscionable.

We also have reason to believe that at the Wade facility, 68-year-old Woodfox, and all CCR inmates there, are being subjected to daily strip searches whenever they enter or exit their cells, even when there is no basis or reasonable suspicion that they might be in possession of contraband.  We have been told that even when Woodfox is removed from his cell to go to the exercise yard, where he is being kept under surveillance of guards and apart from any other inmates or prison visitors, he is strip searched when he leaves his cell and upon return.

Moreover, we have reason to believe that the Louisiana DOC continues to knowingly engage in behavior that violates the due process rights of inmates held in solitary confinement.  The requirements of the 14th Amendment Due Process Clause call for periodic, meaningful hearings on the question of whether a prisoner should be held for continued closed cell restriction.  Yet, we are told that in many Louisiana DOC facilities, officials orchestrate sham 90-day reviews that take no consideration of a prisoner’s conduct while he was in solitary or the prisoner’s state of mind, and do not attempt to determine, by any defined standard, whether the prisoner should be released to a less restrictive cellblock or dormitory.  We have been informed that there may be more than 100 inmates who have been subjected to these fictitious reviews.

In addition to the above-detailed due process violations, this use of prolonged isolation over a period of 40 years at Angola and other Louisiana DOC facilities is indicative of cruel and unusual punishment, and its blatant and persistent use suggests that this practice is pervasive and not confined to the Angola 3. We have reason to believe that there are other inmates who have received less attention from the press who have also been subject to such onerous, punitive periods of isolation.

We do not allege these apparently unconstitutional patterns and practices lightly. Over the past 6 years we have engaged officials, inmates and stakeholders in conversations about conditions at the prison, and most of what we have heard is alarming.  Recently, lawyers representing inmates on Angola’s death row filed suit in federal court alleging that the conditions of confinement there are inhumane because the tiers are not air-conditioned, and the heat index goes as high as 195 degrees Fahrenheit in summer months.  On July 2, 2013, Chief U.S. District Court Judge Brian Jackson in the Middle District of Louisiana issued an order in that case directing that temperature data be collected for 21 straight days in advance of an evidentiary hearing set for August 5.  Just as with the death row at Angola, the CCR tiers at Angola, Wade and Hunt have no air-conditioning in the scorching Louisiana summer heat.

Finally, we have reason to believe that Louisiana DOC employees have colluded with persons from the Office of the Louisiana Attorney General to fabricate violations of prison rules to unjustifiably punish inmates. Significant issues also exist related to prisoners’ personal safety, unhealthy environmental conditions, inhumane sanitary conditions and excessive use of force by prison staff.  We have been told that e-mails between the Louisiana Attorney General’s office and Louisiana DOC employees document that, in the Fall of 2008, staff of the Attorney General’s office and Angola prison “joined forces,” as a February 10, 2010 Order of the federal District Court describes it, to search a year’s-worth of Wallace and Woodfox’s recorded phone calls for “‘sufficient justification for stiff disciplinary action.’”  Wilkerson v. Stalder, No. 00-304 (M.D.La.) (Doc. No. 374 at 9, 10).  This search coincided with proceedings related to Woodfox’s motion for bail after he was granted habeas relief by the federal District Court which was later overturned by a split Fifth Circuit panel.  We are told that as a result of their efforts to find pretextual disciplinary violations—which involved staff of the Attorney General’s office requesting and listening to privileged attorney-client calls—Wallace and Woodfox were written up for phone call violations; sentenced to a removal from the dormitory setting where they had peacefully resided for eight months; and placed back into isolation, where they remain today.

In this day and age, the federal government simply cannot abide unconstitutional behavior of this magnitude from those who run corrections facilities. It simply cannot be that in this country, a state can subject men to inhumane solitary confinement conditions, for decades on end, with no standards for the review procedures in place to ensure that such profoundly harsh confinement is justified, without intervention by our federal government.  As the Supreme Court found in Brown v. Plata, “prisoners retain the essence of human dignity inherent in all persons.”

In this spirit, we ask that the Civil Rights Division’s Special Litigation Section use the Department’s statutory CRIPA authority to investigate and ultimately take all appropriate action to ensure that Louisiana’s prison system fully complies with the mandates of the Constitution and all applicable statutes.  The Division’s work in the Orleans Parish Prison and St. Tammany Parish Jail cases have sent a strong signal that the Department is serious about its obligation to protect the rights of institutionalized persons in the State of Louisiana.  The situation at Angola, especially the treatment of the Angola 3, is ripe for investigation and immediate action.  We look forward to your earliest response.

The Honorable Bob Goodlatte, Chairman, House Committee on the Judiciary